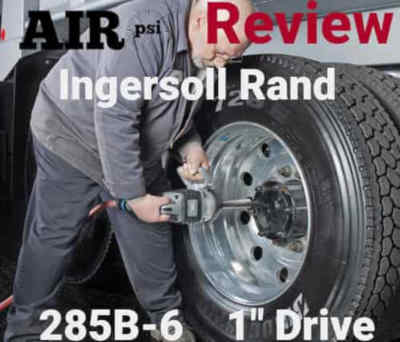 The Ingersoll Rand 285B series impact guns are designed for heavy-duty commercial use. The most popular model is the IR 285B-6 which features a 6-inch extended anvil making lug nut removal inside deep truck and semi-trailer rims a breeze. The 1" square drive incorporates a hog-ring and thru-hole to help retain the 1" impact sockets.

Featuring a solid steel impact mechanism, with 6 phenolic vanes the 285B series impact guns can deliver 1475 ft/lbs. of extreme torque to handle the most demanding jobs. The motor's combination of high inertia and low BPM provides plenty of hard-hitting power with less air consumption. Free speed is 5200 RPM for quick spinning of fasteners. The sound level is 98.8 dB, which is loud, but average for 1 inch drive pneumatic wrenches in this power range. The 285B hammer hits hard with 700 Blows per Minute.

The 285B series impact guns are manufactured with an improved feather-touch trigger for precise control of the tool. Three forward and three reverse power settings can be selected depending on the requirements of the job. Dual handle design makes the tool easier to handle.

These Ingersoll Rand 1" drive impact wrenches are designed for professionals & heavy-duty applications such as industrial maintenance, heavy truck and tire lanes and heavy equipment repair. The 285B series is backed by a 1-year warranty. The 1/2" NPT air fitting rotates 360 degrees to help prevent kinked air lines.

1" drive pneumatic impact guns require a substantial amount of air flow (CFM) for optimal performance. Air consumption at load for the 285B series is 46 SCFM at 90 to 120PSI operating pressure. Average air consumption is 11 CFM.

For continuous heavy-duty use you'll require a substantial sized air compressor and a large air storage tank. In any case it is recommended to use 3/4 diameter or larger air hose and high-flow fittings for maximum air flow.

Ingersoll Rand pneumatic tools are known for quality and power. The price is competitive, especially when compared to some of the big-name impact guns. The Ingersoll Rand 285B-6 1" Air Impact Wrench was priced around $450 at the time of this review update in December 2021.

This is a popular air gun with hundreds of Amazon reviews. 85% rated 5 stars, with an additional 10% rating 4 stars. The 285B-6 is an excellent choice if you want a commercial-quality 1" air impact wrench at a reasonable price.

Our Ingersoll Rand 285B-6 Ratings

Industrial quality 1" impact gun and backed by a 1-year warranty.

Excellent choice for professional mechanics and heavy equipment maintenance. We gave the Ingersoll Rand 285B-6 an overall rating of 4.5 stars.

2. Put both hands on the impact wrench for better results removing stubborn nuts.

3. Just snug wheel lug nuts with impact , then use torque wrench to tighten to specifications.

The Ingersoll Rand 285B-6 One Inch Drive Pneumatic Impact Wrench is a top choice among professional heavy equipment mechanics. This gun offers tremendous value for the quality and performance of the tool. If you need a heavy duty, commercial quality wrench that can withstand continuous use and abuse, this is your gun.