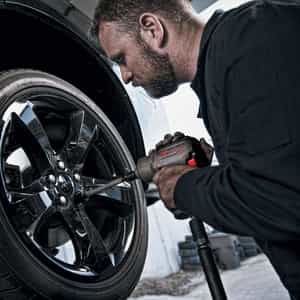 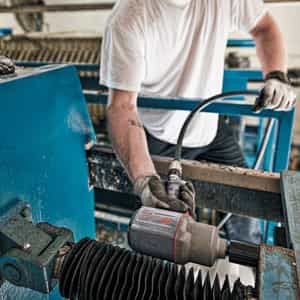 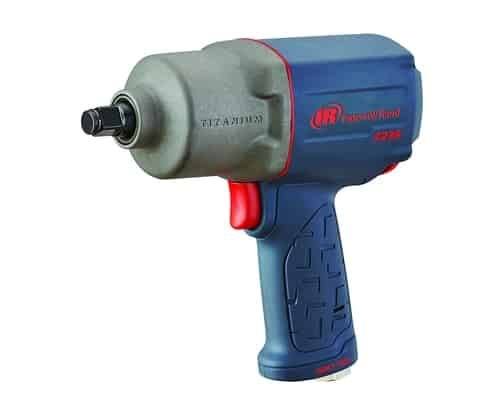 With 1300 foot-pounds of nut-busting torque, the 2235QTiMAX is the best in its class and can handle the most demanding jobs with ease. Tightening torque is rated at 900 ft-lbs. which could easily sheer off most bolts if it weren't for the four-position power regulator and trigger control that lets you feather the torque. A finely tuned twin-hammer impact mechanism with 1220 hits per minute provides smooth operation and plenty of torque to remove even the most stubborn bolts that lessor impact wrenches won't budge. No load speed is rated at 8,500 RPM for fast removal once the fastener is broken loose.

The 2235QTiMAX consists of a lightweight and rugged composite case and ergonomic handle that helps prevent fatigue. The tool weighs just over 4.6 pounds. Designed for heavy duty applications such as industrial maintenance, suspension work and heavy equipment repair, this is one tough tool. The Ingersoll Rand 2235 air impact wrench features a titanium hammer case and steel wear plate for durability and long life. This gun was designed for rough use in harsh environments. The 2235QTiMAX is backed by a full 2-year warranty.

The at load air consumption rating for the 2235QTiMAX is 6 SCFM at 90 PSI operating pressure. For optimal continuous duty usage, you'll want at least 20 CFM and a 20 gallon or larger air compressor. For intermittent home use at reduced capacity, you can get by with a smaller air compressor. In any case it is recommended to use short air lines of 3/8 or larger diameter and direct connections to the gun without the use of quick-connect fittings for maximum air flow.

Ingersoll Rand pneumatic tools are assembled in the USA and for the quality and power of the gun, the price is competitive. The Ingersoll Rand 2235QTiMAX 1/2" Quiet Titanium Air Impact Wrench was priced around $260 at the time of this review in late 2020.

Reviews from professional mechanics, highlight the 2235QTiMAX Impact gun's power. Many boast that it removes nuts their co-worker's guns won't touch. Another positive, many reviews mention, is the feather trigger as opposed to the more on-off trigger on AIRCAT models that get a lot of complaints. Durability is another widely mentioned trait of the Ingersoll Rand air impacts. Many have abused their guns for many years, and they still perform well.

What we didn't like - With almost 1500 user reviews, the 2235QTiMAX is the highest rated 1/2" air gun sold on Amazon. Although most reviews were 5-star, there was one reoccurring complaint, which we will discuss. Several reviewers complained about the ergonomics of the gun provided a poor fit against your thumb. This could be an issue with a specific size or shape hands, as it was a very small percentage of reviewers that complained about it, however it's worth mentioning.

With around 90% of the 1500 Amazon reviews awarding 5 stars, The Ingersoll Rand 2235QTiMAX is a solid buy if you need a high-quality 1/2" air impact wrench.

Note:  The Ingersoll Rand 2235 series air impact guns are available in quiet and standard versions. Both styles also have a 2" extended anvil option.

Industrial quality 1/2" impact gun, solidly built in the USA and backed by a 2 year warranty.

The IR 2235QTiMAX is competitively priced and usually retails around $280.

Excellent choice for professional mechanics or a premium upgrade for home or farm use. We gave the Ingersoll Rand 2235QTiMAX an overall rating of 4.5 stars.

2. Put both hands on the impact wrench for better results removing stubborn nuts.

3. Just snug wheel lug nuts with impact , then use torque wrench to tighten to specifications. 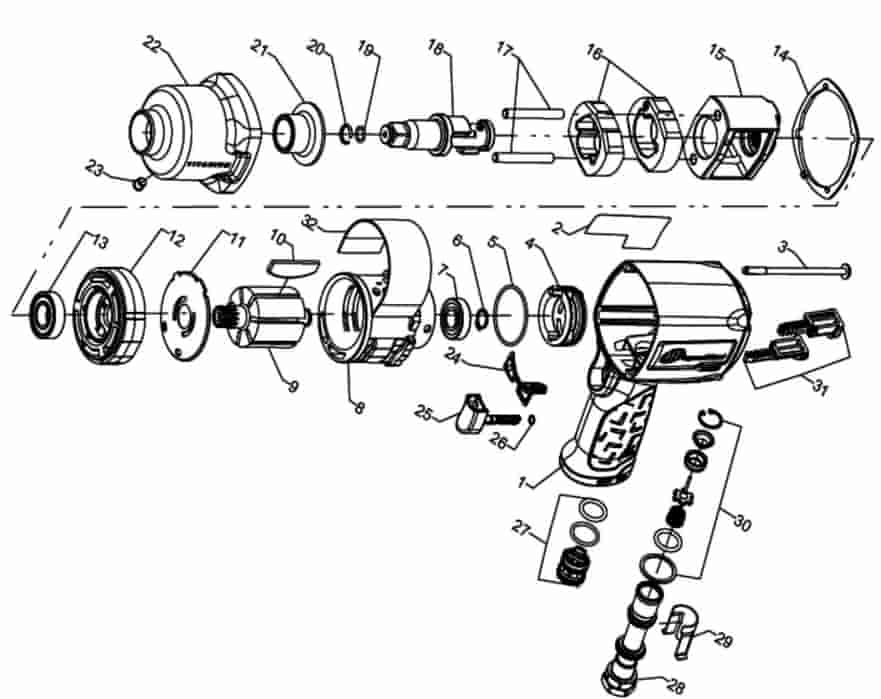 Impact guns like the Ingersoll Rand 2235 series are great if you're a professional mechanic, do heavy-duty industrial maintenance or are an avid DIYer that works on machinery. There is really no substitute for the nut busting torque of a powerful air impact wrench like the 2235QTiMAX. A few clicks and a fast spin and that stubborn lug nut is off. No more busting your knuckles with breaker bars and cheaters, a quick pull of the trigger and you're done.

Just make sure you have a large enough compressor with ample CFM to power your new gun and you'll be good to go. Higher PSI compressors and larger air storage tanks can compensate somewhat for marginal CFM output compressors to allow limited operation of air impact guns.

If you would like to compare the 2235QTiMAX vs other highly rated air guns, check out our Best Pneumatic Impact Wrench Reviews to get a good look at competitive air gun reviews.